Each spring, Girl Scouts of California’s Central Coast will present The Bauerle Family Girl Scout Gold Award Scholarship Fund to support girls in their pursuit of higher education. The Award is presented to top applicants who have demonstrated personal excellence in academic, community, and Girl Scout life.

The Bauerle Gold Award Scholarship Recipients will be selected and awarded a one-time scholarship up to $1,500.

To be eligible, you must be:
• A Gold Award Girl Scout*
• Registered Girl Scout in the Girl Scouts of California’s Central Coast council
• A graduating high school senior
• Enrolled as a full-time student at an accredited college or university for the 2021-2022 academic year**

* Members currently in the process of earning the Gold Award may apply for this scholarship if your Gold Award Proposal has been reviewed and approved before April 16, 2021. If selected for the award, receipt of the scholarship is contingent upon successful completion of your project and having your Gold Award Final Report Form approved by August 31, 2021.

** High school students are eligible to apply. If selected for the award, receipt of the scholarship is contingent upon enrollment for the 2021-2022 academic year. 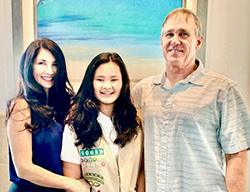 The Baurle Family and Girl Scouts

Karen Bauerle began her Girl Scout journey as a Brownie, the level for second and third-grade girls, and her mother served as her and her sister’s troop leader for nine years. Girl Scouts can be a true family affair, and soon enough even her father was very involved with the troop. Later when Karen had a daughter of her own, she could not wait to share her enthusiasm for the program and started a troop of their own. She has since been a troop leader for ten years, served as a Service Unit manager, and now assists with recruiting and mentoring through Girl Scouts.

The Bauerle Family has remained actively involved with the Girl Scouts, working both to serve the greater community and the organization’s membership. Karen is passionate about starting new troops and passing them on to mentored leaders. She currently leads three troops with immense support from her husband, Randy, who recognizes the value that Girl Scouts can bring to girls’ lives. Their daughter Ashley is currently working on her Gold Award, the highest honor a Girl Scout can earn. Gold Award Girl Scouts are recognized for tackling meaningful issues in a way that drives lasting change in their communities and beyond. Recognizing that there were no current Gold Award scholarships, Karen and Randy decided to follow in the footsteps of these proactive Girl Scouts and take action.

The Gift of Education

If you are interested in learning more about how you can support the gift of education, please contact Meghan Lopez at development@girlscoutsccc.org. 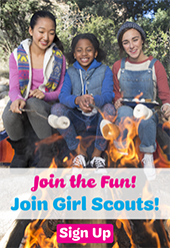 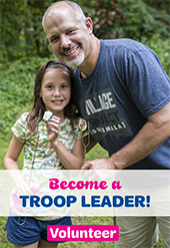